5 Reasons Why Books are Better than Movies 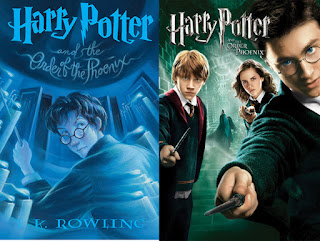 Harry Potter and the Order of the Phoenix was the first movie that really disappointed my wife. It wasn't that the acting was bad, or the cinematography, or the special effects. But it was the first time that she had read the book before seeing the movie, and it ruined everything! Her expectations for which scenes she thought should be in the film, the way she thought the characters should look or behave, it was all wrong.

Why is that? Why is the book always better?

I have come up with the following five reasons why I believe that the book will almost always be better than the movie:

1- We get inside the main character's head

They say a picture is worth a thousand words, however a thousand words may not be enough to communicate what is happening inside a character's head. When we read a book we get exactly what each character is thinking and what their thought processes are. I can't tell you how many times I have watched a movie and asked "Why did they choose to do that? Why didn't they do this instead?" Movies cannot show us what a character is thinking as well as a book can because it is really hard to put a camera inside someone's head.

The time when this is most obvious to me is when a blockbuster movie is adapted into a book. All of the meat from the character's thought process is missing and the book comes across as very hollow. The reason this happens is because the author is trying to describe what they saw on the screen, rather than giving us additional depth by showing us what the character is thinking. They also don't have the freedom that filmmakers have in taking "artistic licence" to adapt the story better for their medium.

A recent example of this is the book adaptation of "Star Wars: The Force Awakens." I didn't see the movie before reading the book and it was scary how empty the book felt as I read it. Descriptions where you would normally get right inside the character's head were kept to mere facial gestures, it was disappointing to say the least. With the stunning visual effects missing, there wasn't a whole lot there to keep me engaged.

In the original telling of a story authors are limited by their word count, not the hours that it takes to read the book. Because of this difference in limitations they can fully develop their characters over the course of several thousand words, where in a movie, the character had better be well developed by the end of their first scene or the audience is lost.

3- We get the original story and not a retelling

The closer we are to the original story teller, the better the story is. I will take for my example the Harry Potter series. In Harry Potter and the Sorcerer's Stone we get a book and movie that are extremely similar. There is little variation between the two, most likely because of how closely J. K. Rowling was kept in the production process. Fast forward a decade to Harry Potter and the Deathly Hallows Part II, and the story told in the movie compared to the story told in the book is drastically different. The fact that there wasn't a book part II speaks volumes in and of itself, and the battle of Hogwarts was completely unrecognizable from page to screen. Very disappointing, and really unnecessary in the context of the story.

There are still very real limits to what Hollywood can produce visually. Budget, camera, and wardrobe restraints all play a role in what is or is not shown on screen. While in our imaginations the sky is the limit! If you see a Frodo, the Hobbit, as even shorter and hairier than Elijah Wood portrayed him, go for it! Jadis, the Witch not nearly scary enough in The Lion the Witch and the Wardrobe? Do as you will. Darcy not charming enough, or Elizabeth not fair enough? Ender not shrewd enough? When you read the book, you can make them exactly what you want!

5- Books are written to tell a story, movies are made to make money

Authors do not begin their careers thinking, “I'm going to make a million dollars.” They start writing because they have a story to tell, and they are confident that they can tell it well.

Movies, on the other hand are made to make money.

For example, when you hear about an awesome book in the media, it is almost never accompanied by the amount of money the author made in sales, but almost always about how well the story was written, or how it has impacted lives. When you hear about a really great movie in the media, it is almost always accompanied by how much they spent to make it and how well it did in the box office. Whether or not the story was told well... not so much. I guess that's what award shows are for.

But really the main reason movies are made is to make money. They reach to the world of books because they are competent fakes. They can retell a story really well, but to write and produce a new story from scratch and do it in such a way that it impacts the world... that is another art form entirely.

There are obviously exceptions to these observations, but they are few and far between. So if it comes down to watching the movie or reading the book, for me the answer is obvious, the book is almost always better!
at February 13, 2018

Email ThisBlogThis!Share to TwitterShare to FacebookShare to Pinterest
Labels: parents as readers

5 Reasons Why Books are Better than Movies

Harry Potter and the Order of the Phoenix was the first movie that really disappointed my wife. It wasn't that the acting was bad, o...